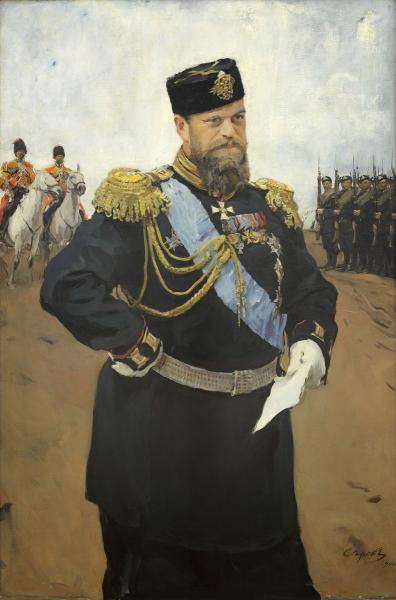 Alexander III (the Peacemaker; 1845–1894) was the second son of Emperor Alexander II and Maria Alexandrovna, née Princess Maria of Hesse and by Rhine of Darmstadt. Before the death of his older brother Nikolai (1865) he was not in line for the throne and was preparing for a military career. In 1866 he married the Danish princess Dagmar, daughter of King Christian IX, who was christened Maria Fyodorovna when she converted to the Russian Orthodox religion. He came to the throne in March 1881 after the tragic death of his father, who was killed by terrorists. He conducted a conservative domestic policy which revealed that his main intention, having reversed the positive results of the liberal reforms, was to stave off the beginning of a period of revolutionary chaos in Russia. There was an increase in censorship, new regulations were introduced in universities, there were restrictions on autonomy, and the position of land captain was established in rural districts, aimed at securing the pre-eminence of the gentry in the social hierarchy. National politics were characterised by an attempt to prioritise a cohesive internal trajectory for a polyethnic Russia in place of a plethora of ethnic Russians.

The stabilization of the political situation created the prerequisites for an impressive economic and cultural emergence. The budgetary deficit caused by the construction of the Trans-Siberian Railway was overcome, the military was rearmed, the Black Sea fleet was reinstated, and a network of Parish Church Schools and professional-technical schools was organised to meet the new needs of industrialisation. Russia’s foreign policy was notable for its peacefulness and ensured international security. Giving state and personal support to museums, he established cultural centers in both capitals and in the provinces and was a passionate collector of art. His collections laid the foundations for the Emperor Alexander III Russian Museum in St. Petersburg.