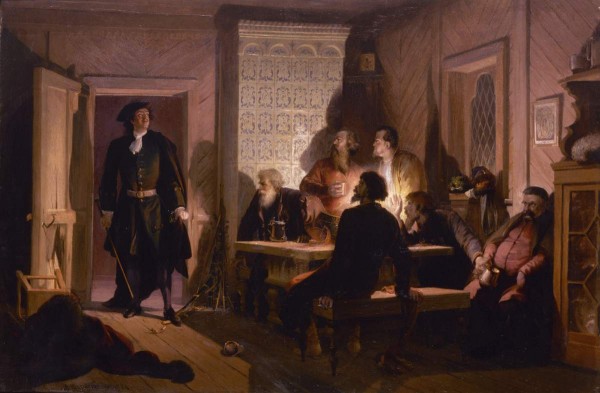 In 1689 Ivan Tsykler, a lieutenant-colonel in the streltsy, left the entourage of Tsarevna Sophia and moved over to the side of the young Tsar. Peter appointed him to the Council of Boyars and made him voivode (military governor) of Verkhoturye; he was later sent to build the fortress in Taganrog. After several years of “honorary exile” Tsykler was dissatisfied with his situation and with the new ideas being introduced, and he and two like-minded boyars, Alexei Sokovnin and Fyodor Pushkin, decided to make an attempt on the Tsar’s life. The intention was to set fire to the house where Peter was, and to kill him during the fire. The plotters were betrayed by two streltsy, exposed and sentenced to death. Adolf Charlemagne’s painting records the dramatic moment on 23 February 1697 when Peter, who had found out about the plot, appeared in person at the secret meeting-place and arrested the participants. 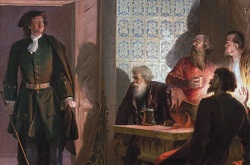