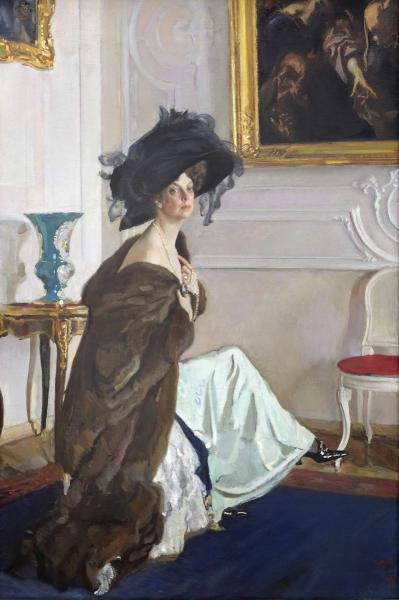 Valentin Serov followed the traditions of Russian official portraiture, as exemplified by Dmitry Levitsky and Karl Brullov in the eighteenth and nineteenth centuries. This representative canvas contains many features of a high style. Proud and narrow-minded, Princess Olga Orlova may not have been beautiful, but she had that special pedigree that comes with breeding. Olga was considered the most elegant woman in the Russian capital; it was said that no one in St Petersburg wore a hat better that she. The skilful and dynamic composition, the restrained and noble tones, the sharp silhouette, the gesture of the well-groomed hand and the “enamel” painting are all intended to paint a psychological picture of this lioness of Russian and European society. The expression in the sitter’s eyes is both haughty and dreamy. Serov showed the portrait to great acclaim at the Esposizione Internazionale di Roma in 1911.