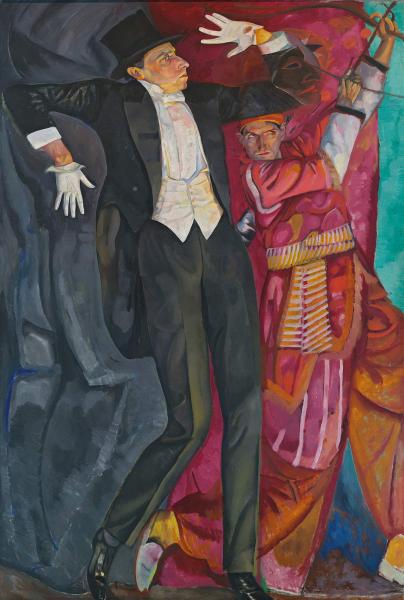 Boris Grigoriev’s portrait of Vsyevolod Meyerhold has an unusual construction. The famous theatrical director is stands with his arms raised in a weird and warped pose, as if caught in the middle of an eccentric mise-en-scène. The allegorical figure of a hunter in oriental dress stands behind him, holding a bow. Vsyevolod Voinov called Grigoriev’s painting a “double portrait of Vsyevolod Meyerhold”. He believed that it “reflected the grimaces and break-up of the modern spirit, when the nightmares of the fairground clown were preferable to the nightmares of Russian reality.”

Vsyevolod Emilievich Meyerhold (1874–1940): Theatrical director, actor. Headed experimental work under the pseudonym of Doctor Dapertutto at a studio on Borodino Street in Moscow (from 1914). Published the L’amore delle tre melarance magazine (1914–16). Directed and performed the role of Lord Henry in The Portrait of Dorian Gray, a film based on the novel by Oscar Wilde (1915).