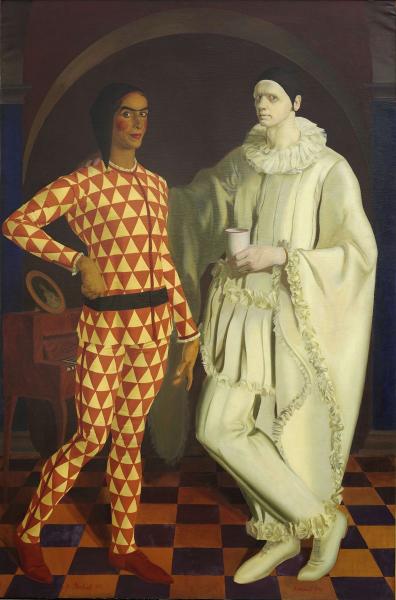 Yakovlev appears in the picture as Harlequin and Shukhayev as Pierrot from Arthur Schnitzler's pantomime Columbine's Scarf, staged in St Petersburg in 1911 by Vsyevolod Meyer hold. Seeing the pantomime by accident, the artists were so impressed by the theatrical spectacle that they started attending every performance. They were eventually even offered the chance to play the roles of Harlequin and Pierrot by Meyerhold. In 1914 they had the idea of painting a double self-portrait. Each of them painted his own self-portrait, and the result was an amazing portrayal of the stage characters and, at the same time, an accurate representation of their own individual personalities. No one would think to look at the picture that it was painted by two different people. Play and Passion in Russian Fine Art. St-Petersburg. 1999. P. 161.

Vasily Shukhayev and Alexander Yakovlev were the representatives of Neoclassicism in the World of Art. Harlequin and Pierrot resurrects the form of the classical portrait, with its academically distinct drawing, chiaroscuro modelling of form, local colours and textureless application of the paint. In the early 1910s, the two artists performed in Arthur Schnitzler’s pantomime Colombine’s Scarf at the House of Interludes in St Petersburg. Yakovlev played the part of Harlequin and Shukhayev was Pierrot. This double self-portrait records their interest in the theatre. For a long time, the picture was unfinished and therefore not exhibited. In 1962, Shukhayev finally completed several details and the painting was exhibited that same year at his one-man show at the Academy of Arts in Leningrad.