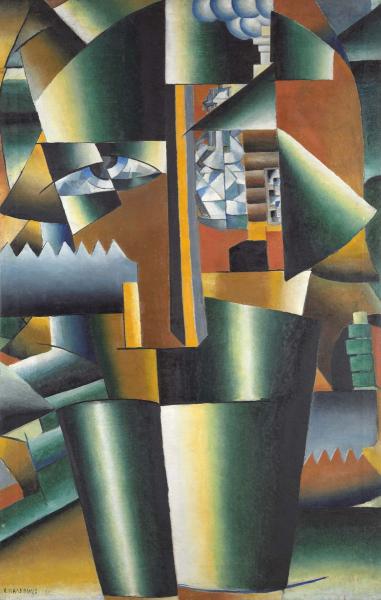 Perfected Portrait of Ivan Kliun embodies one of the constant motifs in the oeuvre of Kazimir Malevich and is traditionally associated with one of his closest friends and followers, the artist Ivan Kliun. Perfected Portrait of Ivan Kliun was first shown at the Union of Youth exhibition (1913–14) and is one of the most typical examples of Cubo-Futurism, both in Malevich’s oeuvre and the Russian painting of the period in general. Wholly in the spirit of its time, Perfected Portrait of Ivan Kliun pays tribute to the theomachist moods of these years, which were particularly widespread among the artistic youth of Russia. Malevich makes a “preparation” of the iconic prototype — the image of the Saviour Not Made by Human Hands — and imparts special expression to the enormous cleaved eye, which becomes an original paraphrase of the All-Seeing Eye. Testimony that Kliun also identified himself with this image is his Self-Portrait (1914–15, Boris Kustodiev Pict. Gal., Astrakhan).

It is an image comprised of various geometric shapes placed on different spatial planes, resulting in a rather difficult composition in which we can make out separate fragments of a wide variety of different objects. There are also certain fragments that “describe” the subject of the portrait with a certain degree of eloquence. For example, the tree trunk refers to Kliun’s humble origins as a peasant, while the many bluish-white fragments and the smoking chimney refer to the sugar refinery in which Kliun worked from the age of 19 onwards. However, when combined with the saw, symbolizing the instrument with which the painter cuts and destroys form in order to transform it into a new pictorial reality, all of the fragments of the material world become symbols of creation and construction: the creation of a new life, a new society, and a new kind of art. In this respect, the inclusion of the word “perfected” in the painting’s title can be seen as referring to something new, something better, in relation to what has gone before.