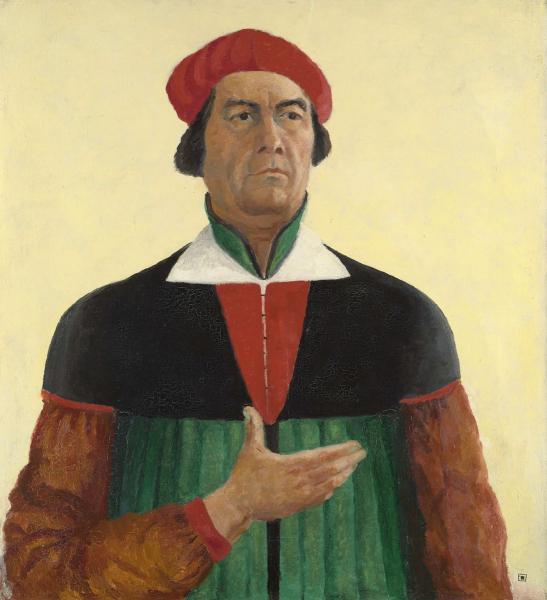 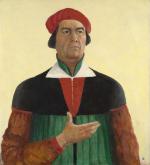 In this Self-Portrait from 1933, which Malevich titled Painter, the artist presents himself in the typical costume of an Italian Doge, which was the name given to the leaders of the maritime republics of Venice and Genoa. It is a costume with a rather geometric structure, and which combines the colors of black, white, red and green.

The positioning of his hand, as though he were holding an invisible book, sends a message to his successors and illustrates the key to gaining an understanding of Suprematism, in which true reality is a world without objects.

In a literary piece from the early 1920s, titled Painter, Malevich wrote the following epilogue: “The painter describes a world and shows it to the observer. The painter needs to be surrounded by things, because through him it is possible to discover new visions; a new symmetry in nature. The painter finds what we customarily refer to as ‘beauty’”.

In this, his final self-portrait, Malevich presents himself as the Creator, the bringer of higher knowledge and liberty; a demiurge who governs the world according to his own rules; a painter who refuses be controlled by the irrational forces of the historical period in which he finds himself. As if to counter his own doubts and internal creative contradictions, his human imperfection and the miseries he experienced over the course of his life, Malevich is asserting his right to establish a posthumous myth of himself for his successors.

Malevich died in May 1935. His funeral ceremony and burial, organized by his followers and friends, constituted the last public act of Suprematism in Soviet Russia. The ceremony took place at the St Petersburg Union of Artists, where an exhibition of artworks took place while the satirical writer Daniil Ivanovich Kharms read poems. The funeral procession took place on Nevsky Prospect, which was then known as the 25th of October Prospect. Malevich’s coffin, which was designed in the Suprematist style, was laid on the open bed of a truck, with his Black Square painting displayed on the truck’s hood. After his cremation in Moscow, the urn containing Malevich’s ashes was buried in the village of Nemchinovka, near a solitary oak tree.

Above the final resting-place of Kazimir Malevich, the self-styled “President of the Universe”, a tombstone was laid. It was designed by Nikolai Suetin, and was in the shape of a cube, decorated with the image of the painter’s Black Square.