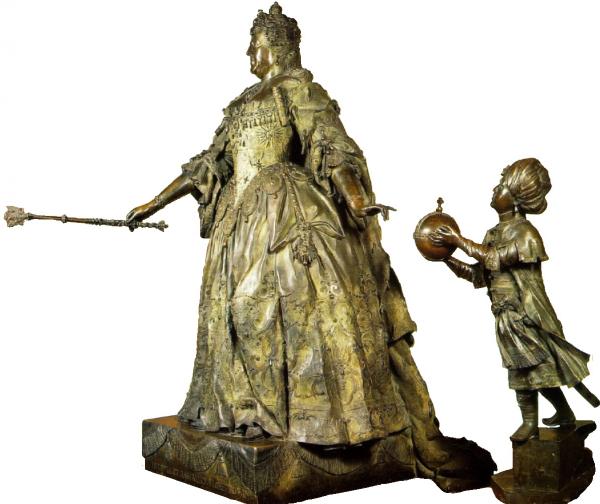 This is a unique work of the monumental Russian Sculpture, which was created from 1732 to 1741. The life-size group was intended to be staged in front of the new (Third) Winter Palace. However, the death of Anna Ioannovna in 1740 and the ascension of Empress Elizabeth to the Russian throne prevented the realisation of this project.

"Anna Ioannovna with a Little Negro Boy" is a rare example of a ceremonial portrait in sculpture. The greatness of the appearance of the Empress does not hide the masterfully transferred personal characteristics, thanks to which the work of Rastrelli became a kind of symbol of a hard and despotic time, which went down in the history of Russia as the Age of Biron.

Empress Anna I Ioannovna (1693–1740) was the daughter of Tsar Ivan V Aleveyevich, and the niece of Peter the Great. She was married to the Duke of Courland in 1710. She was invited to take the throne of Russia by the Supreme Privy Council, which was formed of members of the senior aristocracy; their stipulation was that they should retain full power. Anna was Empress from 1730. After enlisting the support of the Guards she tore up the conditions that had been forced on her and became absolute ruler. Her domestic and foreign policies can be seen as a continuation of Peter the Great’s policies, and the capital was moved back to St Petersburg. The Office for Secret Investigation was set up in 1730, and it soon gained exceptional power and sowed fear among the population. Anna’s closest entourage was made up of foreigners, and in historiography her favourite, Ernst Johann von Biron, Duke of Courland, became a symbol of German domination. She has gone down in history as someone who loved “amusing incidents” and crude entertainments. Despite external piety she was noted for her brutal disposition.