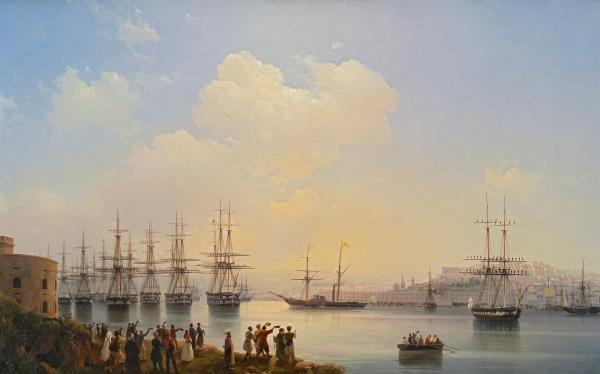 A Russian Squadron on the Sevastopole Roadstead

The painting “Sevastopol before Midday during the Tsar’s Visit” was presented during an exhibition in Feodosia on 18th  March 1846. To judge from the facts that there is an yacht with the Emperor Standard lifted up, the people greeting the Emperor on the shore and the ships  of the Black Sea Fleet lined up in front of the yacht, it is the painting of the Russian Museum that was commissioned to the artist by Nicholas I.

Nothing in this painting foresees the tragic destiny of Sevastopol, a Black Sea pearl of the Russian crown, and the Russian fleet in the Crimean War of 1853–1856.

The boats depicted in the painting, including the 130 cannons flagship “The Twelve apostles” of the Black Sea of the Russian fleet, were submerged at the entrance to the Sevastopol Bay in 1854 to prevent the entry of the French, British and Turkish fleet. By doing so, Sevastopol was protected from the sea. The painting also depicts the ritual of sailors, which was afterwards abolished: while remaining off the harbour, the sailors would stand on the mast of the boat and keep the alignment.