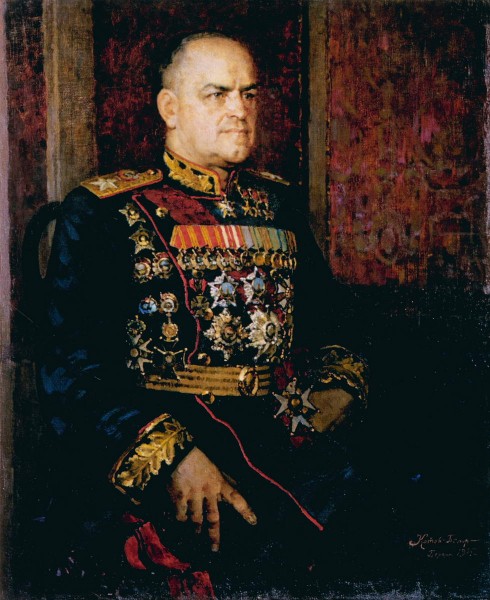 Georgy Konstantinovich Zhukov (1896–1974): Soviet military commander, Marshal of the Soviet Union (1943), four-times Hero of the Soviet Union (1939, 1944, 1945, 1956), deputy USSR People’s Commissar for defence and deputy Commander-in-Chief (from 1942). Commanderin-Chief of the group of Soviet Forces in Germany and high commander of the Soviet Administration (1945–1946). He was also a Hero of the Mongol People’s Republic. Pyotr Kotov’s work is an artistic document depicting a concrete person. The literature is silent about the circumstances surrounding the painting of the portrait, possibly linked to the fact that the popular commander fell into official disfavour in March 1946 and was removed by Stalin from the post of Deputy Minister of Armed Forces and Commander of Land Forces of the Odessa Military District and, two years later, the Urals Military District.