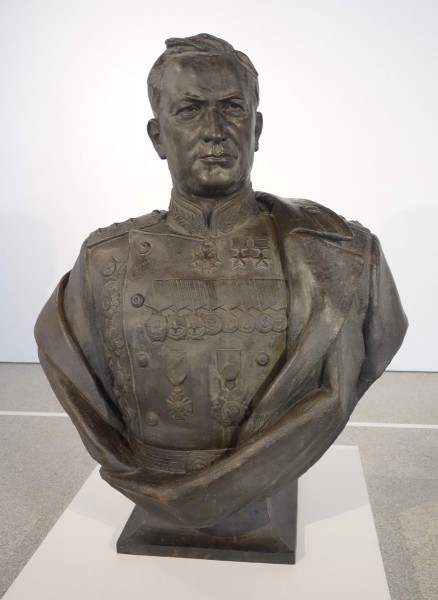 Timofei Timofeyevich Khryukin (1910–1953) was a Soviet military leader, pilot, colonel general in aviation, and twice Hero of the Soviet Union (1939, 1945). He participated in the Spanish Civil War (1936–1939), the Sino-Japanese War (1937–1945), the Soviet-Finnish War (1939– 1940), and the Second World War. For Khryukin’s ceremonial portrait the artist adopts the classical bust form, known in art since the time of Ancient Rome. The military greatcoat thrown over the general’s shoulders is transformed by the sculptor into a sumptuous drape, similar to the ceremonial toga of a Roman military leader. Different versions of the busts, executed in various materials, were installed on Khryukin’s grave at the Novodevichy Cemetery in Moscow and in the city of Yeysk, where Khryukin was born.